One or the other was present at our livestream to the DDFs or stumbled over it on our YouTube channel. Now that this livestream is already four weeks ago, we would like to remind you of it on the one hand, and on the other hand take a look behind the scenes, how the preparation for it went...

On 19.12.2022, just before Christmas, the last livestream of us for the year 2022 was on the schedule: "Spot on - We build ourselves DDF". Jens-Peter and Stefan presented how you can build your own DDFs without using the DDFCreator. As we all know, the DDFCreator can only be used for a simple and initial definition. Because you have to make manual changes anyway, we used the livestream to show you the manual writing of DDFs for DMXControl 3.

If you are now explicitly interested in certain topics, our chapter markers will help you. By the way, we add these also in our other livestreams some days later, so that you can get a quick overview of the contents.

But how does the time actually work before we are finally in front of the camera for you? What is the preparation like? In the livestream, we already indicated that even this topic proved to be more complex to prepare than originally thought. But why was that? Let's go back a few weeks...

Basically, Jens-Peter and Stefan had the idea for quite some time to do a livestream on the topic "Writing DDFs". Because just for those of you who had no contact points with XML files in the context of DMXControl 3 yet, corresponding explanations on the speech level paired with contents of our screens should simplify the thing, in comparison to long explanations with us in the forum.

When this livestream should go over the stage, however, was not fixed for a long time in terms of dates. We discussed this in the entire team at the beginning of December, after the rough sequence and the scope had been clarified. Both were further refined in the marketing team meeting that took place a few days later. There, we determined which devices we wanted to use for the livestream, including various backup strategies, and also went over the technical setup. This included, among other things, that Jens-Peter would be both the moderator and the director for this stream, and that this would also all be done locally on his PC. Because as soon as we work with three or four people in front of the camera, we use our dedicated streaming PC, where one of us also exclusively takes care of the directing. For this livestream, however, the "small" setup was sufficient. For this, Stefan "only" had to send his four video streams to Jens-Peter.

While the LED-BARs, with which we worked in the livestream, belong to our personal inventory, we still had to make inquiries about the scanners. Thankfully, Stefan was allowed to borrow them without any complications. In his warehouse, they were made ready for streaming, i.e. cleaned externally and internally and given a final check. Then they went on a short trip from Kassel to Dortmund.

Regarding the schedule, it became more concrete about a week before the actual date, after the technical framework was finally clarified. That's when the schedule for the livestream was drawn up on the basis of the arrangements in the marketing team, which were then further concretized and optimized over the following days. Particularly when the livestreams are more complex, this is a good way for us to keep in mind so that we don't get bogged down with the content. 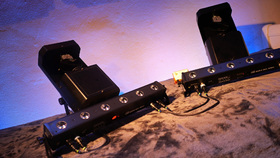 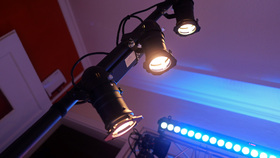 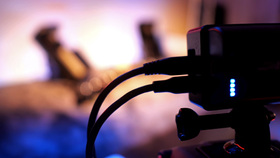 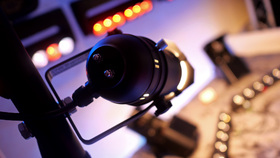 The hot phase usually starts about two hours before you can really see us live on camera. During this time, we of course ramp up our streaming setup on the one hand. This means that each of the presenters sends their video and audio material to the streamer, in this case to Jens-Peter. This includes that we partly adjust our screen resolution, so that you can easily see all the content shown on our screen in the livestream. Once we are wired up for the stream, we check in OBS every time if everything is coming through and adjust the different scenes if necessary.

Another essential aspect in this hot phase is getting your own appartement ready for streaming. And depending on the camera perspective, this is of course more or less time-consuming. For this stream, however, Stefan had already done a test setup on his "presentation area" the night before, installing targeted lighting, for example. For Jens-Peter it was again the usual two spotlights in the background and the front lighting in the form of Nanoleafs on the wall. However, this was also not that much effort. So, the conversion within the preparation phase went fast from the hand. The other things to be done are, among other things, putting away objects that should not be seen in the stream or even wiping over one or the other spot.

Only when all these points are done, the announcement is made: we can start with the stream!

Association News - 22_CW02 - A current view inside our HwTs

We have already reported several times about our hardware test server (HwTs). What has happened since the last report?

You have enjoyed our livestream format "Live Coding with Arne" so much the last few times, we would like to expand the spectrum a bit more. But in which direction?

Shopping is on everyone's lips - including ours. In the last few weeks, however, there have been various changes that we would now like to discuss collectively. Keywords: Shipping to other EU countries and Amazon's Smile program.