After the long pandemic phase without performances, the first concert of the Collegium Musicum Baden-Baden took place recently. One of our members was there and contributed the lighting part.

In many places, the pandemic situation prevented theater groups and choirs in particular to perform. Thus, the concert in the Lutherkirche in Baden-Baden in the second week of March was also the first after a long break for the Collegium Musicum Baden-Baden. Already last fall, my brother asked me if I could imagine doing the lighting for his first concert as choir director for the choir he leads. I accepted, and so the real planning began for me at Christmas, when we used the family time to discuss the final schedule and developed initial ideas for the lighting. The concert addressed the themes of Passion, Suffering and Hope, with the combination of choral music, various musical improvisational elements, text recitations and coordinated lighting scenes combined to a total work of art.

After a walk-through of the church, I was able to rebuild it in Easy View to be able to program in advance. This time the reconstruction was a bit more complex, because the ceiling of the church is barrel-shaped and the ceiling above the chancel corresponds to the inside of a spherical segment. So I decided to use my knowledge from more than 10 years ago: You can insert self-designed 3D objects in Easy View, as long as you create them as DirectX objects and place them in the EasyViewLibrary folder (see my short HowTo under HOW TO: Self-designed objects in Easy View) Only problem: In the current Blender version, the plugin that took care of the DirectX export is no longer running. Luckily the last still working Blender version (2.79) is still downloadable and so I was able to recreate the Luther church accordingly, as you can see in the next pictures: 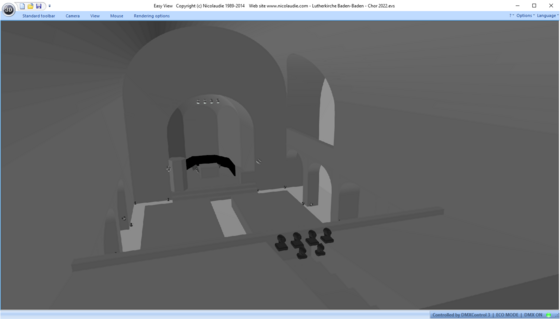 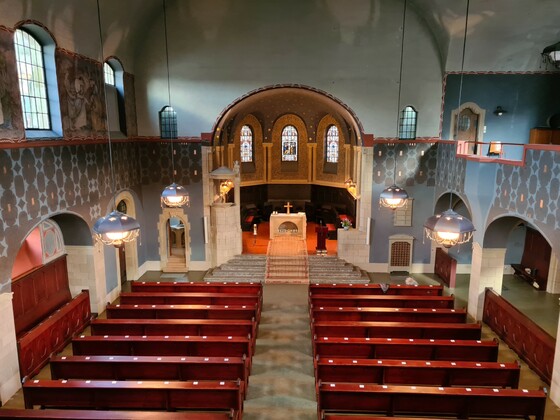 The spotlights were distributed over four areas - the nave, the chancel, the gallery and the organ loft. The columns in the nave as well as the walls to the left and right of the chancel were lit with a total of 12 Eurolite PS-4s. For the arches on the side, I had originally planned PS-4 spotlights as well. However, it turned out that the wood paneling was too dark, so I used Cameo Studio PAR64 instead. I divided the wall of the sanctuary into a total of 7 sections + ceiling. The front parts of the wall were lit with two larger LED spotlights, the remaining areas with LED bars in single pixel mode. This way, color gradients across the chancel wall were also feasible. Fortunately, the spotlights could be hidden quite well behind the altar. On the main gallery (as shown in the picture above) all moving heads (Futurelight DMH-160 MK2), two of the four washers (Futurelight EYE-7) and two conventional spotlights (not shown) were set up. They served as effect lighting, in the case of the conventional spotlights as front lighting for the choir, and in the case of the washers partially as lighting for the speaker in the pulpit. In the organ loft, I set up two more washers and two LED spotlights to illuminate the ceiling even better. In addition, there was a total of 8 LED spotlights as note light. The control was done with DMXControl 3.2.3, a main cuelist and several cuelists that were started from the main cuelist (mainly for effects). 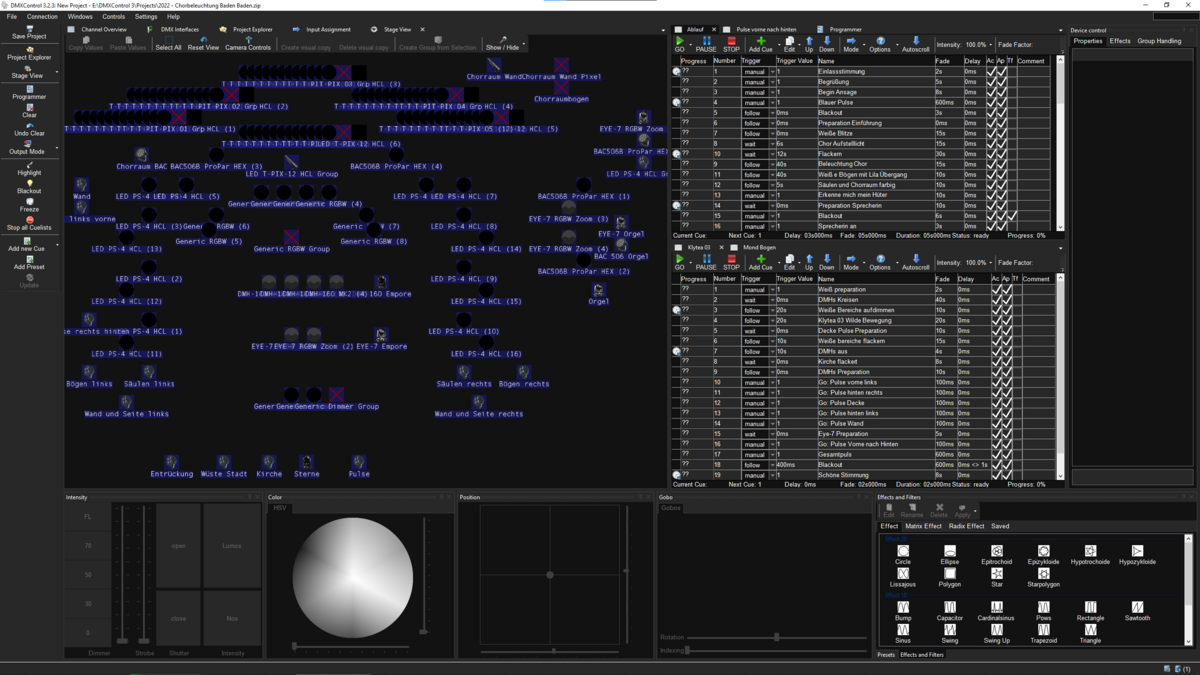 Overall, the program was very diverse and so there were also different requirements for the light. I planned the choir pieces almost exclusively with static light, in order to give the choir the appropriate space and not distract from it too much. Only in the intro I worked with strongly changing lighting scenes, while the announcement ran and the choir lined up. In addition, the program also included several textile improvisations that were lit based on a nighttime scene. Some of the music and vocal improvisations were accompanied by a pre-planned lightshow, so the lighting had a fixed sequence and the music and vocals were improvised on top of it. This diverse mixture of singing, piano music, text and song improvisation and light finally formed a total work of art, which also convinced the local press (Collegium Musicum in the Lutherkirche in Baden-Baden (german, restricted access)). So it was a successful event and maybe there will be one or the other follow-up event. 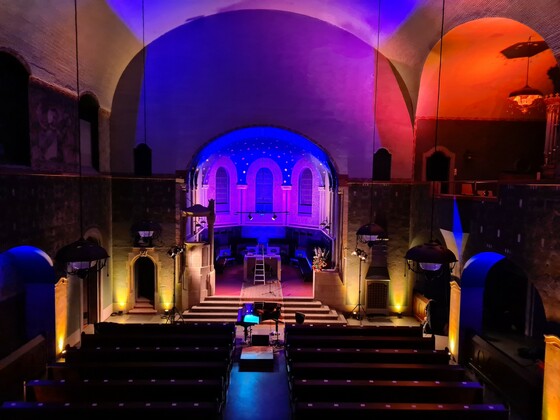 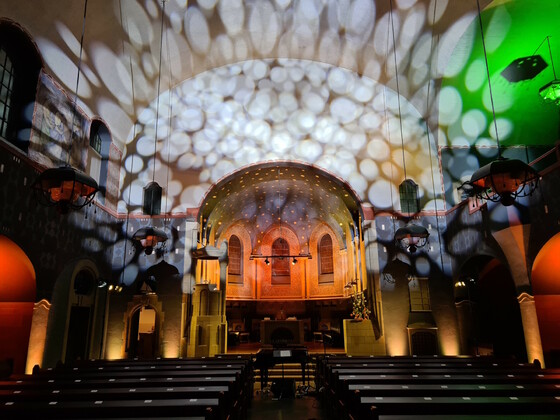 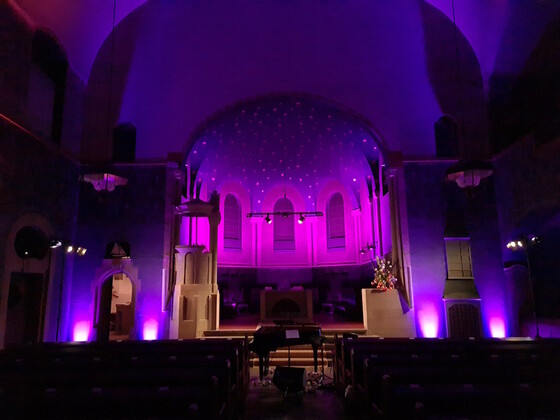 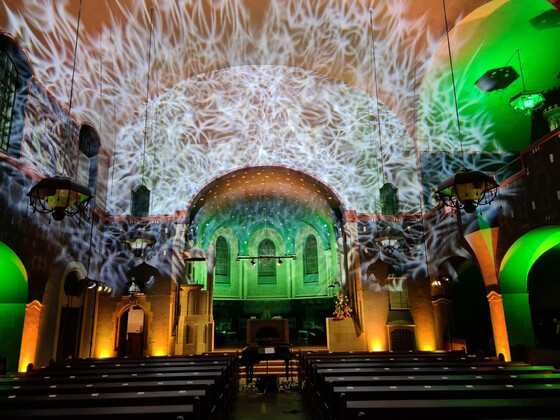 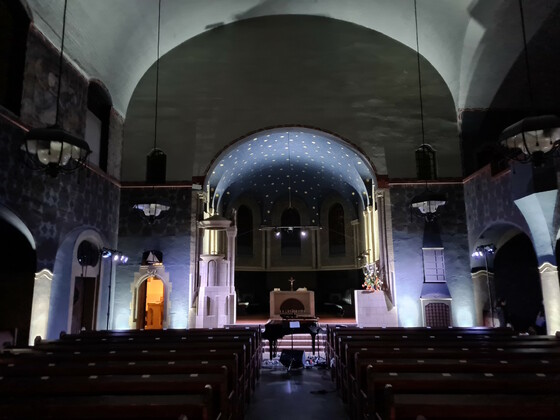 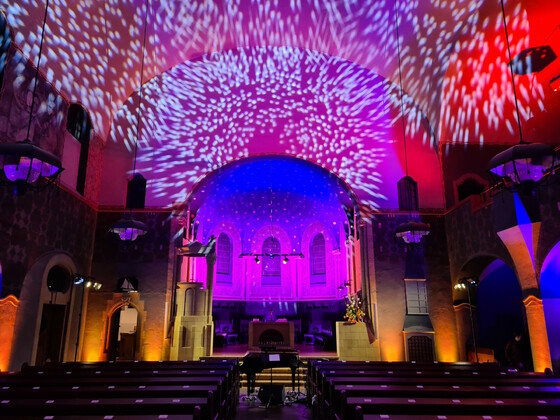 Frank recently had a gig in Berlin, even if he wasn't on stage himself. It was about the lighting of a classical concert of the Tonkollektiv of the HTW Berlin in the Emmauskirche to Berlin-Kreuzberg. Despite the simple lighting setup, there was a lot of applause for the musicians as well as some important insights. More about this in his short report.