For the first time in three years, a graduation party took place at the Platen-Gymnasium Ansbach this year. The technical support was provided by our community member Johannes. In this Live@Work issue he reviewed the whole project including ups and downs.

For the first time in three years, the Platen-Gymnasium Ansbach held a graduation ball again this year. As former students, we supported this year's high school graduates with the technical realization. We provided both lighting and sound equipment for the evening. Another alumnus took over the music as DJ.

Rigging (Equipment of the school)

The LED bars were loaned by the municipal youth work of the city of Ansbach, the rest was rented from a local rental company.

The setup started at 9:00 am on the day of the event, which was scheduled to start at 7:00 pm in the evening. The rental company's tech didn't arrive until around 10:00 am, so there was time to set up the truss. The full eight meters rested laterally on the lifts, which were positioned at the edges of the stage. Symmetrically from the center, the two individual poles were attached vertically to this with two double clamps each. Two LED bars were attached to each of these poles. The twelve Aurobeams hung across the entire width of the truss, alternating between the front and rear profiles to distribute the weight evenly. Also on the truss were the two derby effects, which unfortunately had to run in a Sound to Light mode due to time constraints. The four Macs stood in a kind of semicircle on the stage. As you can see on the pictures, there were fixed step lenses, spots etc. on the ceiling. These were not integrated into the DMX setup and were only used for a few speeches. Thankfully, we had also received Powercon DMX hybrid cables from the rental company, which were extremely practical for cabling. At this point only to recommend.

Our FOH was right on the stage next to the DJ, since there was nothing planned on stage except for two speeches, so we were able to save quite a bit of cable run. 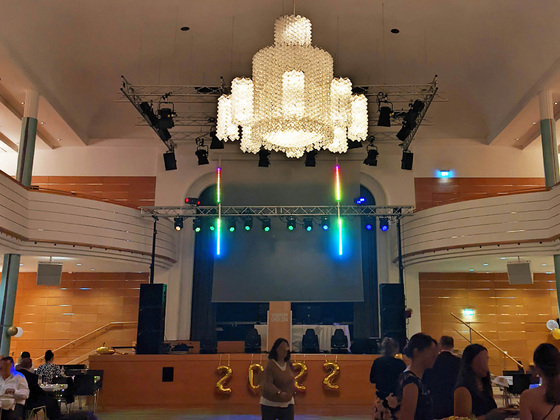 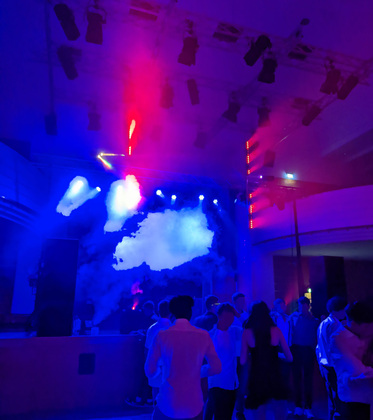 For the control of DMXControl 3 we used a Streamdeck and a keyboard as mentioned above, at the monitor additionally a softdesk. Most of the programming was done by me in advance without 3D visualization. The devices were all in their mode with the greatest number of channels, so we could control all pixels individually for the bars and Aurobeams. In the software, we worked with a cuelist for one lighting scene each, which were grouped into cuelist groups. For this, we divided by device properties and device groups, and in addition there were some more cuelists with higher priority, which were flashed over the basic mood. The keyboard was only used for this purpose and to control a speed master. Four macro board profiles were placed on the Streamdeck, which could be switched between with the help of a button on the Streamdeck. On each profile there were four buttons for the dimmers and the colors of the three device groups, and in the bottom row of each profile there were seven flash effects. All motion effects (absolute and relative separated), gobo effects and zoom effects were on the softdesk and were (due to lack of touch) unfortunately selected via a mouse (or beat synchronized). A possible improvement here would be, for example, to control these with an existing tablet via TouchOSC. 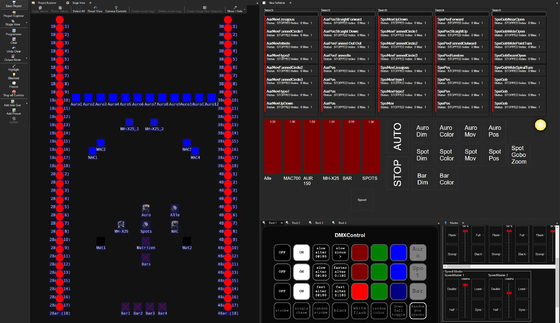 As a special feature, in addition to the group masters, there was also an automatic control for all effects of the basic mood, both the motion effects on the softdesk and the dimmer and color effects on the Streamdeck. I implemented this via an additional playlist with two empty cues, which switch beat-controlled every eight bars. The ID of the current cuelist is again converted to a beat via a beat-to-bool. This way I have a signal with 1/8th of the tempo and can adjust this dependency relatively fast via the above mentioned cuelist. This signal then goes into a random node, which in turn passes the numbers of the next "should" cuelist to a format node for proper formatting. This then just needs to be put on a cuelist node and the output of the beat-to-bool on its go input. For a reliable operation I let the cuelist name arrive with a delay node, so that at the next go a name is already present and it does not jump over just at that moment.

During programming I noticed a bug in the visualization of Radix devices in the GUI. These flicker back and forth between the normal device display and the matrix display at irregular intervals when an effect is applied to a device property. This is however in all probability in the next Major version (3.3) of DMXControl 3 repaired.

Back to the setup

Back to the setup, now everything was ready for a first test, and it worked ... nothing

Since we had the new Art-Net interface in use for the first time, this was the first mistake. Unfortunately, we only managed to output one universe and used our backup interface for the second universe. But even now the Aurobeams only worked partially, although they were set up correctly. After a power-off and resetting the factory settings, this error was also solved, the cause remains unexplained.

The event went without further incidents, only at a Mac 700 I had to reignite the discharge lamp again. 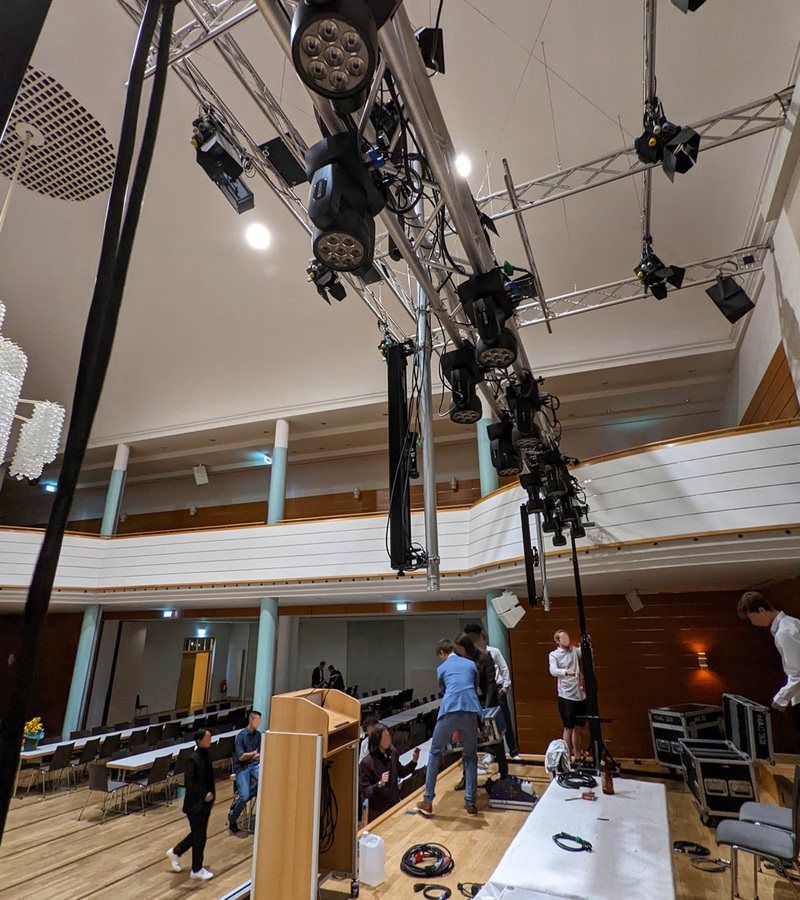 Due to the extreme lack of time during setup because of the many problems with the MHs, unfortunately a lot of planned things fell through. I wanted to program some effects before the event, because some buttons remained so empty. Furthermore, we had two small MH-X25 with us, but we couldn't set them up. For the next time we want to plan a little bit more time for the setup and program everything in advance.

Good event with some technical problems in advance, especially with the Mac 700 and Cameo Aurobeam 150. More time for setup would have brought out some of the pressure and left more time for experimentation. Hybrid cables are handy. 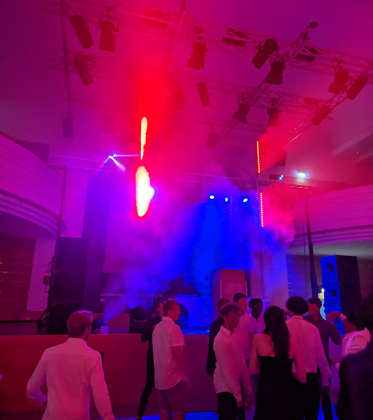 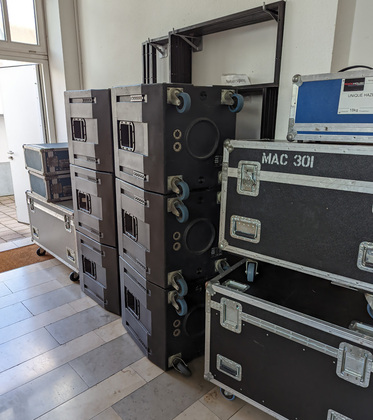 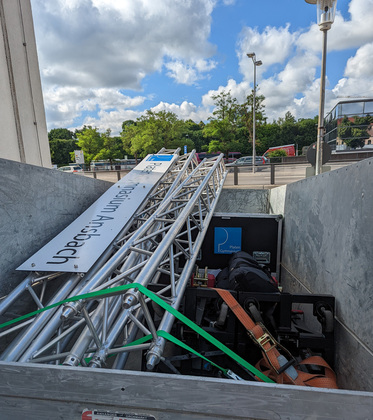 Live@Work - 21_CW32 - Youth service in the Protestant church in Mittenwald

Today we have a guest article in our Live@Work series by our user millemedium. He has designed a youth service in the Protestant church in Mittenwald with a group of young people and programmed several light shows in DMXControl 3.