As announced in the introductory words, I would like to describe you in the following report how I, as a longtime user of DMXControl 2, experienced the change to DMXControl 3 - with all ups and downs. That's why my report is much longer than I thought at the beginning. I hope you enjoy reading!

For the year 2020, we had once again received the order to provide the disco for the Dörpfest in Sandelermöns (district of Friesland / part of Jever, known because of the Jever Pilsener) on two evenings there open air. The light would have been controlled with DMXControl version DMXC 2.12.2. For this everything was programmed, set up and prepared already for a long time.

With this one spent some time to learn the program and then to build the project. With this I have already successfully carried out some events. What was already possible with this. One could tickle out there already some. 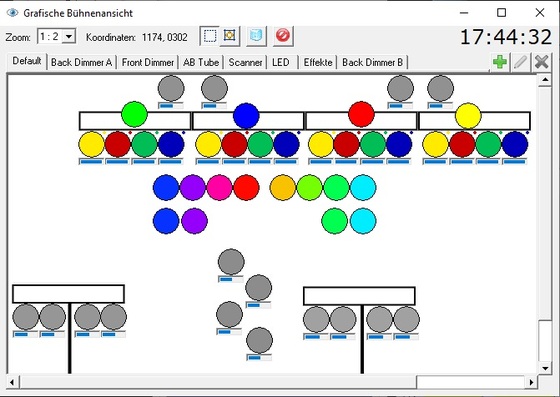 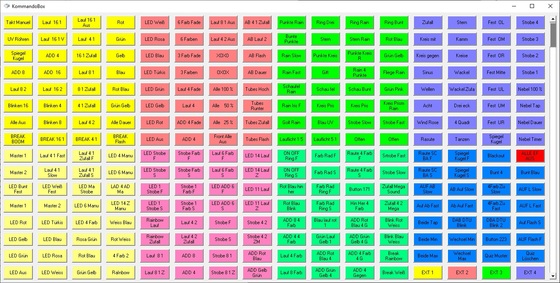 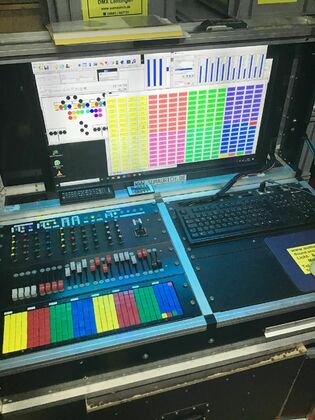 Unfortunately, this event in Sandelermöns has been canceled because of the Corona problem. Other events were also cancelled that year without replacement.

I have been following the developments of the DMXC 3 version for some time. I found a few components missing in the early versions. For example, an integrated softdesk, the Input Assignment and the DMX-In was also not so mature. The DMX-In was very important to me because I wanted to use my self-built DMX console. The softdesk was only available as a plugin and since my softdesk should be quite extensive, I did not want to do the configuration twice. Then I somehow also lacked the time to deal with it more closely. DMXC3 was also too bug-intensive for me at that time. 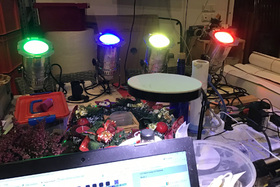 When then in December 2020 in the Advent calendar of DMXControl the whole tutorials for DMXC3 were published at YouTube, I began in my Christmas vacation to deal nearer with DMXControl 3. I watched these videos intensively and could hardly wait until a new one came out the next day. On the tablet the video was watched and, on the laptop, next to it immediately tried out.

First it was just four LED spotlights to test the first things. Static patterns and then I tried my hand at the first running lights. First with cuelists with several cues. then with effects and filters. On the laptop I tested some things in the "small" format. You could call it feasibility studies. I wanted to control the whole thing with the softdesk and via my self-built DMX console. I will describe the console and the PC in more detail later. 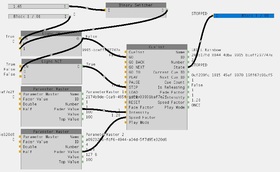 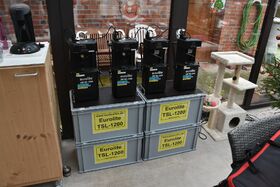 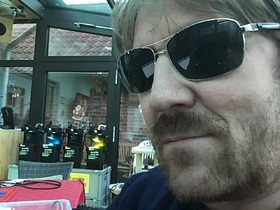 Then our scanners were added, for which I still had to build the DDFs. Again, for the movements, I tried some settings, effects and filters that might look good to me.

The set gets bigger

Then, when more LED fixtures were to be tried, the fixtures moved to the garage, and I controlled them from the winter garden via Art-Net. Christmas was coming closer. Since we celebrate that in the winter garden, it would have become otherwise narrow there. I could simply put the laptop aside. I could see the spotlights through the small pane of the side garage door. This is where more effect ideas came up. Such a rainbow looks much nicer with many spotlights. 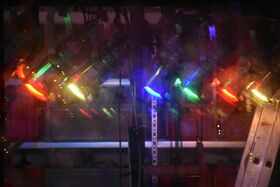 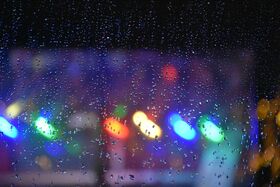 Move to the garage

When it got a little warmer in March 2021 and I bought another fan heater for the garage, I also moved to our big light PC in the garage. The test project from the winter garden was running on the laptop to see how to transfer it to the "big project" and implement it there.

A little fun fact on the side: When it got a little warmer in the garage due to the fan heater, a butterfly woke up and felt very comfortable on the warm PC. The only problem was that when it flapped its wings in the direction of the monitor, it actuated and changed something on the touch monitor. This is very unpleasant when configuring the software. 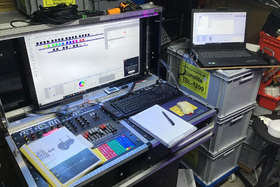 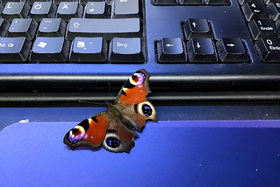 Here in the garage, most of our devices were then gradually set up: 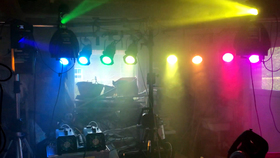 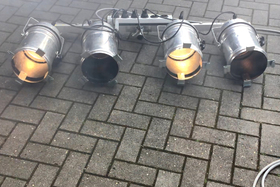 It is a self-made construction, consisting of an aluminum frame with inserted aluminum plates. Built up as two 19" elements side by side with 10 height units each. On the right side, under the keyboard and mouse pad, the PC is installed. This is a PC with an AMD FX-8350 processor, 16GB RAM, SSD hard drive, as a graphics card we have an NVIDIA GeForce GTX 1060 3GB, with Windows 10 Pro 21H1.

On the left side there is a 19" panel with 3U with 40 knobs, one with 24 faders and one with 256 buttons. The top 1U panel is equipped with switch LEDs such as interface indicator and switch, average switch, operating voltage indicators, external inputs, etc. In the compartment below is the Nodle U1 interface and a DMX multiplexer with 64 analog and 256 digital inputs. The multiplexer is basically based on the construction proposal from Digital Enlightenment. But here are five of the boards installed, one for the analog inputs and four for the digital inputs. The software for the multiplexer was programmed by a good friend. 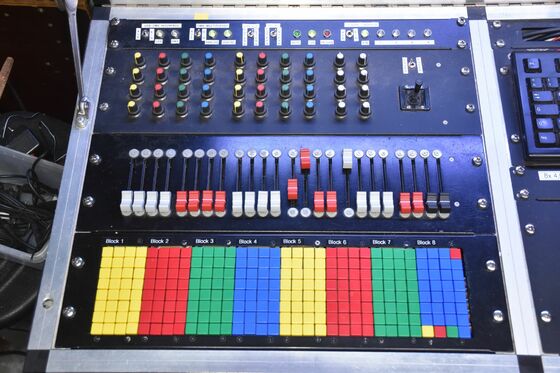 The DMX multiplexing board

In the hinged cover there is a 32" touch monitor. This is the biggest one that fit in there. It has FullHD resolution. Which was technically possible and affordable at the time of purchase. In retrospect, a 4K monitor would have been nice, too. You would be close enough to see everything and in DMXC more would fit on the monitor. 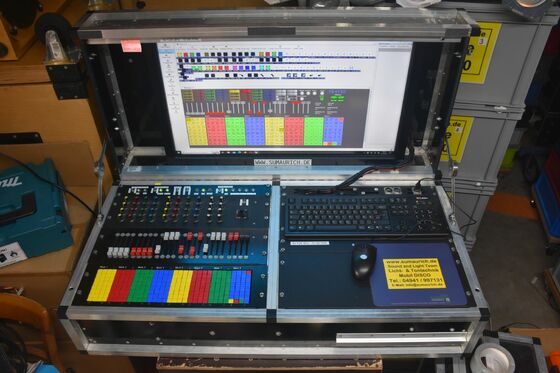 Now to the "big" project

It should be a project, in which on the light PC in the program everything, which is available at devices, is prepared and depending upon structure everything can be used. There should be enough cuelists for each device group to have a lot of combination possibilities.

Now I spent some time in the garage to program the set, to get to know the program further and to realize my ideas. I then also tried out some things again, which or which effects and filters look best for me with which settings and combinations.

What I particularly like about DMXC3 is that I could completely rebuild my DMX multiplexer board in the software with the softdesk. Of course, with a few special extensions, like switching interface on and off, a time display, display of pulse and interval times and intensity of the fog machines, a few more displays and so on.

Assignment of the keypad

The buttons are divided into 8 blocks of 32 each.

To fill this softdesk with life, a very extensive input assignment is necessary. There are a lot of elements on my softdesk. Alone 320 elements from my DMX multiplexer board. What has become possible here and what one has learned there is already great.

Control of the different functions of the programmer 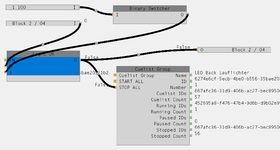 In the stage view, the elements of the dimmer channels with color filters for the background are in the top row on the left. To the right are the elements for the prepared device groups. I have provided these with their own images. The light blue ones are for, for example, running lights that should run "forward". The orange ones run "backwards". The 16 means that all spotlights in the group are used. The 8 is for the left and right 8 headlights each. With 4, only 4 headlights each are addressed.

The elements on the outside of the next row are for the front lighting. The ones in the middle for the audience blinders. Left below the four white elements down are for the Tubes. In the middle are the RGB LED spotlights. Below that are the scanners. To the right of the scanners are the fog machines. Also, for these groups there are prepared device groups for combining.

Via the group handling I can set how the groups should behave to each other. This gives a lot of combination possibilities to apply effects and filters.

I have created two layouts for the project.

One for programming, with all the elements that are needed. My softdesk is here in editor mode, which can be reached via the entry in the context menu "Open in designer". 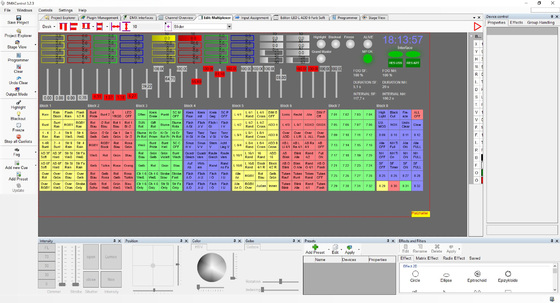 The second one, called “show”, I use during events. Here only the stage view and the softdesk are open in live mode. All other elements are not here because of the better clarity. 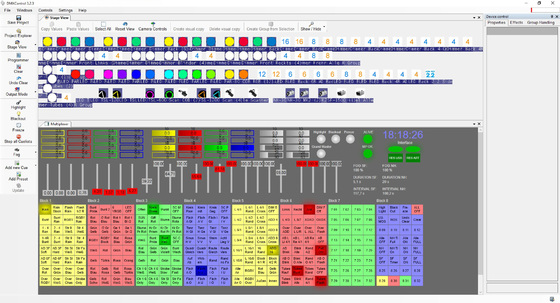 After the set had grown and "finished" so little by little, we had got the order for the Dörpfest Sandelermöns again in 2021. But that too was cancelled because of Corona. So, the set further optimized, refined and without the beloved audience somewhat frustrated extensively tested further.

The first event with DMXC3

2022 again the order, but this time the signs are better. The village citizens' association (DBV) Sandelermöns gets more intensively into the planning. It is the Dörpfest with Oldtimer tractor meeting and flea market. On two evenings there is disco under the open sky. So finally, the chance to work with DMXControl 3 live in front of an audience. We only used our LED fixtures. I was so excited.

Here is a before panorama picture of the venue. We set up on the left under the canopy. The paved area was the dance floor. 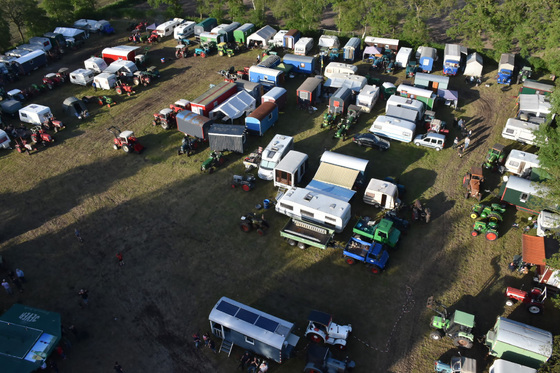 The event area in Sandelermöns, photographed from the basket of an old fire brigade turntable ladder. 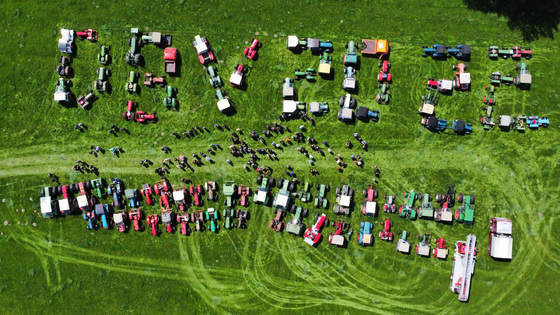 A campaign by the Village Citizens' Association (DBV) in 2022. The font was formed from vehicles. This happened during the usual outing on Saturday.

The weather was very good, great audience, great atmosphere and on Saturday also with live music "campfire music" by Claus Fischer and Ivo Herkelrath. The equipment and as well as the software went through without any problems. It was celebrated in an exuberant mood until sunrise. 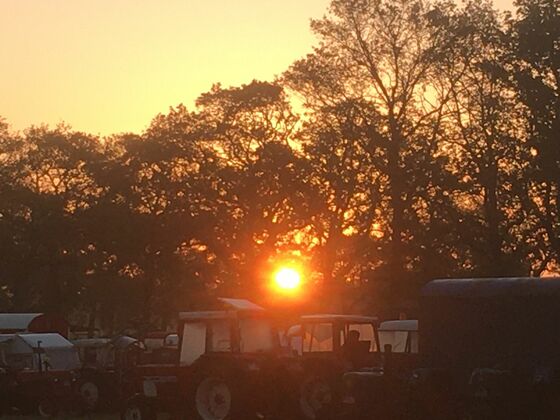 Here are some impressions of the Dörpfest 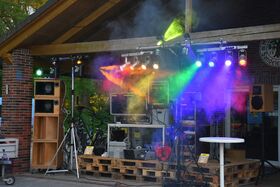 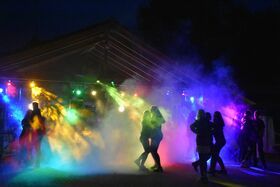 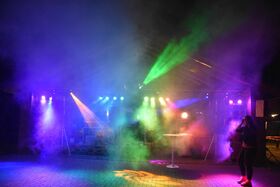 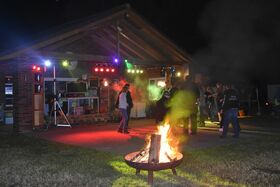 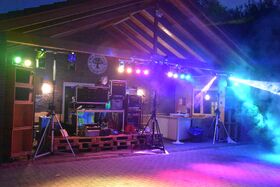 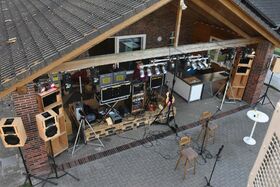 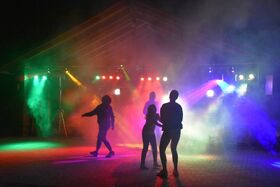 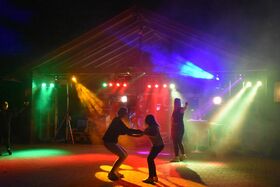 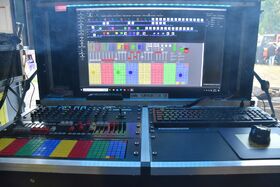 I have used the set a few times now and I am still enthusiastic about the possibilities that are offered here. Also, the positive feedback of the audience rewards you for all the time you put into the project. There are quite a few people who have asked us about the great light show and appreciate it.

Here are the links to the videos of the event: