The year 2020 will be remembered as the Corona year. Thus, Corona had the world firmly in its grip at Christmas as well. But as a small concession, certain relaxations had been decided, at least for Christmas itself in Germany. Certain forms of church services could take place. At least in the area of Stuttgart, Germany, outdoor services with about 100 participants were allowed. For one of these services in the "Waldheim" in Stuttgart-Vaihingen, I was asked if I could provide lighting for it. The plan was to create a certain ambience and, above all, to set the scene for the Christmas story with various light images. The service took place on a larger asphalt square, which is framed by several groups of trees and a small house. Thereby, the light was divided into more or less three stations (the estimate, the angels and shepherds, and the stable), each of which was to be symbolized with light. 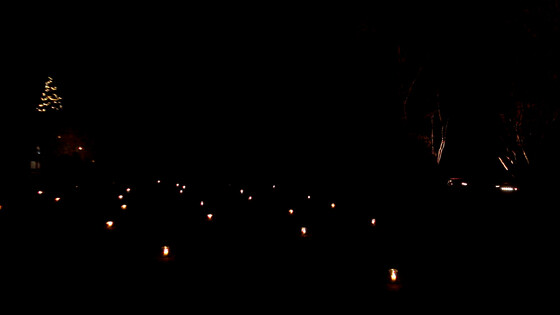 Unlike my previous events (among others in churches in Stuttgart-Vaihingen, Germany and surroundings like Live@Work - 19_CW07 - One last time a travel through time , Live@Work - 19_KW02 - The Christmas story in an other perspective and Live@Work - 18_CW22 - Open night in church with DMXControl 3) this was my first major outdoor event and accordingly there were still some preparations to be made regarding the weather resistance of the equipment. This became especially important when it became clear that it was going to rain heavily on Christmas Eve and snow later on. In addition, almost everything had to be set up on Christmas Day itself due to the fairly free accessibility of the site. So a total of 6 Eurolite LED IP T-Pix 12 were used, which could stand outside without any problems thanks to IP65 classification. Four of them were placed as uplighting in a small group of trees at the right edge of the square, where they symbolized the stable. The other two illuminated several tall trees on the left side of the square and were used to symbolize the estimate and other things. In addition, four BeamZ BAC506 were used, which were made weatherproof with rain covers. Two of them were used on a tripod for stage lighting, the other two served as wall lighting behind the stage to symbolize the shepherds. The remaining spotlights, two Futurelight DMH-160, four Futurelight EYE-7 and four Eurolite PS-4 were set up in rain-protected locations. The moving heads were used to illuminate the lower hanging branches of several large trees from inside the house to symbolize the angels here. The PS-4 served as further ambient lighting and also as symbol for the estimate. To contral all fixtures, DMXControl 3 with two Showtec Net2-3 Artnet interfaces was used. The spotlights were distributed to the four DMX universes in order not to risk a complete failure in case of weather-related problems on one DMX route. In contrast to my Christmas services in Büsnau, Germany, the individual cues were triggered by hand. 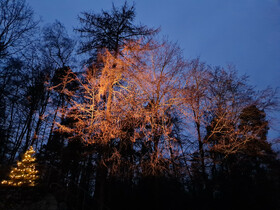 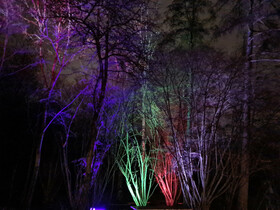 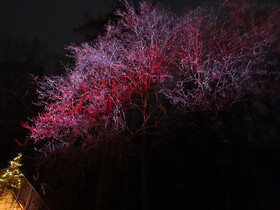 Even under these difficult conditions regarding setup and spacing, the service went very well. There were very little testing possibilities for the lightshow. However, there were no proplems and the light images unfolded their effect. Thanks to the many helpers who directed the streams of participants and the set-up positions marked with candles, safe participation could be guaranteed. The participants obviously saw it the same way, due to the very positive feedback. The weather must have been benevolent as well, because the rain didn't start until the service was over and the rain-sensitive devices had been put back. Only the LED bars saw the rain, but that was not a problem. Thanks to the positive feedback, this will certainly not have been the last event in this form.

Pleasant summer evenings invite you to hold outdoor events. The same goes for Jens-Peter's disco at the school summer party.

For a long time, many of you couldn't really get the equipment out the door from the ancestral storage space. For alternative projects, however, this is not necessary at all.