"Let's get ready to rumble!" - there is probably no better sentence, which stands more for the combat sport. At the Phoenix Fight Championship in the Rundsporthalle Baunatal this sentence did not fall, but it was a real highlight for all participants including our club member Stefan. How to experience such an event up close, you can read in this Live@Work edition.

On June 11th, 2022 the Phoenix Sport Academy in Kassel had invited to a big Fight Championship in the Rundsporthalle in Baunatal. Around 20 fights were to be held in various styles, including kickboxing, MMA (Mixed Martial Arts) and Thai boxing (Muay Thai). Various pairings were even competing for the German championship. Also, a European champion title was fought out on this evening, namely in kickboxing in the heavyweight category.

Unlike a classic boxing event, the opponents did not compete in a ring, but in an octagon with comparatively high protective walls. For some spectators, this may look a bit unusual. In the end, however, it served to protect the athletes. So, there were injuries from time to time, because a sportsman fell between the ropes and then from the ring in a classic ring.

This did not dampen the mood - quite the opposite. There was a sensational atmosphere in the hall throughout the evening, which even the spectators registered on the livestream. The event was also broadcast on the fight24.tv platform, where some of the fights can now also be seen afterwards. This sensational atmosphere also spilled over to the athletes in the ring, who all surpassed themselves. So, in the end everyone saw very nice fights, sometimes spectacular for the spectators, sometimes seemingly boring for an outsider, but technically on the highest level. 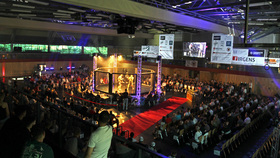 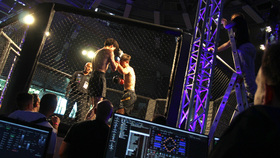 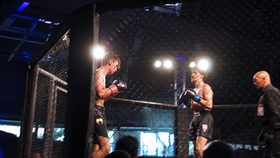 My brother and I had the order to be responsible of the lighting for this event. This included accurate lighting of the ring as well as appealing show lighting for the hall. Versatility was important to us right from the start.

Instead of simple stepped lens fixtures, we used a total of 16 Clay Paky Mini-B in the warm white variant here, which we distributed around the ring on four towers with a height of 4.5m. Using seven RGBWW LED chips with a rated power of 40W per chip, we not only created a super uniform light in conjunction with the zoom optics. The light was also very pleasant in terms of color temperature. This gave us excellent illumination for the fights. If nothing was happening in the ring, the Mini-Bs were available to us to brighten up the hall during the breaks or to illuminate the red carpet where the athletes and their teams entered the hall accompanied by music. 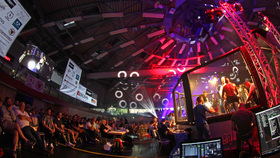 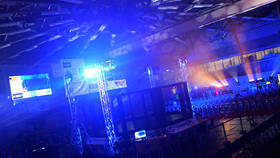 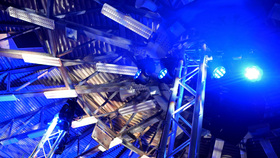 To ensure that all the light was not concentrated on the ring alone, we positioned a truss arch behind each of the seating blocks on the stadium floor. On this we mounted three Futurelight DMH-160 and four Futurelight Mega Color Wave.i. Due to the elevated position on the truss arch, the light of the devices was not obscured by the audience, even if they were standing. The latter was not a rarity that evening. Together with two Futurelight DMB-160s each, which we positioned on cases on the long side of the hall opposite the main grandstand, we filled the entire hall with light, especially since the use of haze and other fog effects was explicitly requested for the event. 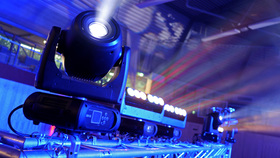 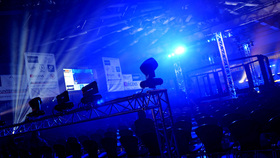 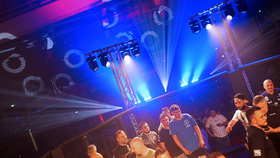 The use of haze thus required the direct involvement of the local fire department. After the fire alarm system was switched off, it took over the necessary fire watch in the entire hall with five employees.

If you've been following my previous Live@Work reports, you're probably familiar with the phrase: I've re-adapted my existing project to the new location. For this event this statement does not apply. Since a long time, I have designed and programmed a project from scratch in DMXControl 3.2.3 once again. The main reason here was that the sequences such as marching in, change between fight and break scenes, award ceremonies etc. could not have been integrated into my classic club show projects without further ado. The use cases were simply too different here. In the end, I only wanted to press one button at a time to immerse the hall in the corresponding scene. Because the declared goal in my place was: I wanted to create an atmosphere and dynamics in the lighting staging that you often only see at large events in the martial arts sector. Here, it clearly played into the fact that I have not only seen numerous fights in boxing on TV. It also resulted in being already live on site as a spectator.

Accordingly, I included elements like red and blue corners as well as dynamic transitions between fight rounds and ring breaks in my programming. So, I had prepared a small construction kit with dimmer effects and movements for the entrances, which I could then assign to the respective corner in terms of color. With this I could bring a bit of variance into the marches, which I further individualized with manually pressed strobe effects. During the fight, only one cuelist ran as a loop, which I switched depending on the situation. The corresponding change of the ring illumination was also built in. For the fight, all 16 Mini-Bs always directed themselves into the ring. During the ring breaks, I pulled off eight devices to highlight the respective corners in color. For the announcement of the winner, I had also prepared my own cuelist. 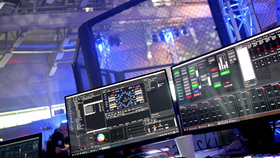 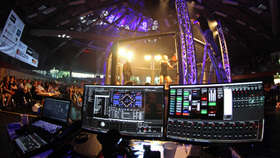 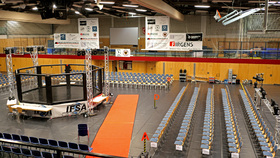 In order to be able to run all the prepared cuelists in a targeted manner, a lot of attention was paid to the priorities of the cuelists during the programming in advance. Here I had to think about a proper concept, which cuelist may be overlaid by another one and how. Highest priority got here the ring lighting, which I was not allowed to switch off straight during the fights.

All in all, it was an event that not only met our expectations. The organizer and the spectators were also very satisfied. However, the fact that I used the big breaks between a group of fights to make small optimizations to the programming was not noticed at all. During the first block, my brother and I had observed the processes around the ring in detail, which I then immediately incorporated into the programming.

Where we will have to adjust in a potential new edition is the positioning of the lighting FOH. We did have some of the best seats for the fight action in the ring. However, from my seat I could not see the door through which the athletes marched into the hall. Here we needed the support of my brother, who had the door in view from his place directly to my left.

The main event of the evening, the fight for the European Heavyweight Kickboxing Championship, developed into the highlight of the evening in the truest sense of the word. The fight, which lasted five rounds of three minutes each, was a constant up and down on both sides. Until the end, no one emerged as a clear winner. The attentive spectators quickly noticed this in the comparatively long deliberation time of the judges. The trophy and especially the belt had already found their way into the ring after the gong. But when the moderator then also took his time, it was clear that the fight was not yet decided - and then it was also called "one round of extra time".

So, the long evening ended shortly before midnight with a real highlight.