Frank recently had a gig in Berlin, even if he wasn't on stage himself. It was about the lighting of a classical concert of the Tonkollektiv of the HTW Berlin in the Emmauskirche to Berlin-Kreuzberg. Despite the simple lighting setup, there was a lot of applause for the musicians as well as some important insights. More about this in his short report.

At the beginning of November, the Tonkollektiv of the HTW Berlin had another performance in the Emmauskirche zu Berlin-Kreuzberg. I was there again with students, because the task was to set the stage for this classical concert with music by Schubert. A total of about 400 guests followed the invitation.

The entire lighting setup was kept rather simple, both in terms of the setup and the sequence of events. The conductor wanted only relatively few lighting moods, which were to be changed with the alternation of choral singing and pure orchestral music. So, the students, who set up and programmed the light show with about 30 lights, decided on a simple scene list for the entire show.

During setup and testing, there were a few problems with one of the two transmitters of the wireless DMX system. After replacing this signal path with a classic DMX cable, everything ran beautifully. Two DMX interfaces were connected to the laptop (one each for the wireless DMX system and one for the cable feed). In this case both DMX interfaces could work in the same DMX universe. Because during a rehearsal once the DMX interface had fallen from the table, the students "secured" it well. 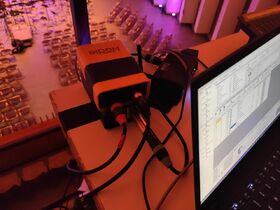 Although we had paid attention to even illumination of the orchestra and the choir during the setup, 30 minutes before the audience entrance the timpanist and the trumpeter "complained" that they were blinded. This generated some stress to accommodate this into the schedule on short notice. In the debriefing it turned out that one way to do this could have been implemented comparatively quickly: put the two affected lamps into a new Device Group, which can then be dimmed separately via its own Group Master.

Also, the executing student once made a mistake and started the new scene too early, because the audience had simply clapped in between. So instead of moving on to the next scene in the scene list, we simply changed the current scene in the stage view to get back in time. Of course, one then has to empty the Programmer so that the originally programmed scene then appears "normally" again.

So, this concert was also a little lesson for all involved around the lighting FOH. The audience also applauded the lighting team enthusiastically and DMXControl ran stable during the show.