If you look in DMXControl 3.1.3 into the Master window, you will find a GrandMaster and for each group a GroupMaster, in order to be able to set the intensity in total and per group. The function of a master should be sufficiently known, which is why we will not go into it in detail here and refer to corresponding other sources. However, with DMXControl 3.2 new masters are added to the existing ones: The SpeedMaster and the ParameterMaster. We will take a closer look at these in the following.

Since it is planned to extend the concept of the SpeedMaster and ParameterMaster further with one of the upcoming versions of DMXControl 3, the masters are currently still created automatically by "using" them. In other words, to create a new SpeedMaster, it is linked to a speed property. The easiest way to do this is to apply an effect to a device parameter. 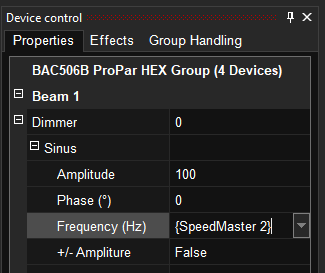 Important: SpeedMaster and ParameterMaster cannot yet be deleted! Therefore, you should only create those that are really needed!

Beat Source of a Cuelist 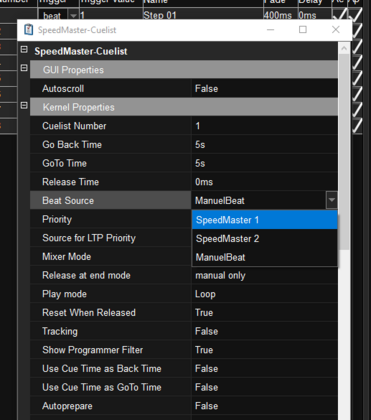 In addition to the effects, SpeedMasters can also be used, for example, in the CueLists to act as a beat source. In the previous versions a beat of the AudioAnalyzer could already be sent to a cuelist. Now the source for this beat can be set individually for each cuelist. To set a beat source for a cuelist, just open the properties of the cuelist and go to the entry Beat Source. There you select the desired SpeedMaster or ManualBeat. 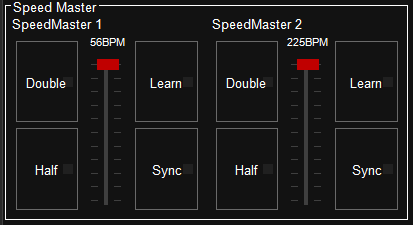 ParameterMaster basically behave similar to SpeedMaster, but they are not used to make the speed values dynamically adjustable for effects, but the parameter values themselves. The values of device functions such as dimmers, etc. but also of effects such as phase can be controlled via a ParameterMaster.

Both SpeedMaster and ParameterMaster can also be fanned. For example, the following can be entered for the speed of an effect: {SpeedMaster 1} > {SpeedMaster 2}. This opens up many new possibilities, as it is now possible to dynamically change the minimum and maximum values between which the property values are fanned. To acheve this only the values of the SpeedMaster have to be adjusted. The same is also possible for example for the phase parameter of an effect with the ParameterMaste,. The only current limitation is that fanning with ParameterMasters only works within effects, since the possible effects of fanned ParameterMasters on general parameters of devices have yet to be investigated. A Fanning of the ParameterMaster for general device properties will be delivered in one of the following versions of DMXControl 3.

Save the Parameterization in Cuelists

As you can see, this master concept is incredibly powerful and very flexible controls can be built with it. Already the current possibilities with the slight restrictions of fanned ParameterMasters opens up the possibilities for very flexible setups.