With DMXControl 3.2 another external control method is introduced: DMXControl can now be controlled with the Elgato Stream Deck.

Who doesn't know that? You make light at an event and notice it's nice and bright on stage, but I can't even read my lettering on my MIDI controller or my DMX console in the dark anymore. Here we show you a gadget, with which you can operate DMXControl comfortably and get feedback back from the software at the same time.

The Elgato Stream Deck is available in three different sizes. The version "Stream Deck mini" with 2 x 3 buttons, "Stream Deck" with 3 x 5 buttons and the "Stream Deck XL" with 4 x 8 buttons. In the two small versions, the buttons are equipped with a 72 x 72 pixel colour display. The buttons of the XL version offer even more space with 96 x 96 pixels. Therefore, it is possible to display individual texts or symbols.

With DMXControl 3. 2 and the new Input Assignment it is now possible to use this device as a further input and output device. In the following you can see an example how you can start and stop a cuelist with a key on the stream deck and at the same time get feedback from the cuelist, which cuelist it is and if it is running.

On the stream deck the conditions of the cuelist “Full on” look like this: on the left the picture with the started cuelist and on the right with the stopped cuelist. 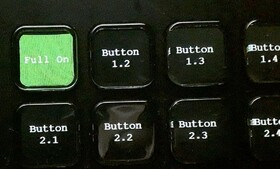 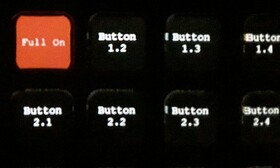 It is also possible to use the buttons to select devices or device groups, for example. There is also a small example of this here:

On the stream deck, not only the images of the respective devices appear, the background colour also clearly visualizes which device group you have just selected. Here, however, we have not used the text of the cuelist, but the image of the device group. It is important that an image is also selected in the properties of the associated group. But for this to work so well, the background of the images used must be transparent and this image must then be saved as a png file. Other file formats like jpg or bmp do not allow a transparent background. 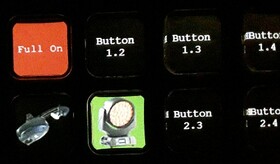 Finally, we would like to give you some facts about the Stream Deck.