With the production of our video tutorials to DMXControl 3 we had from the beginning not only the pure explanation videos on our shooting schedule, where we illuminate quite compactly function for function in DMXControl 3. It was decided quite early - and we kept this also constantly in the back of our minds - that we would like to present you different use cases from A to Z and show you how you can implement them with DMXControl 3. Stefan had taken on the topic "Clubshow with DMXControl 3", after Jens-Peter made the beginning with his Christmas tree as a Christmas present. In both cases, however, it quickly became apparent that the production of such a tutorial is not easy.

So, let us switch to the first-person perspective. The most uncomplicated part of "my" live tutorial was the light setup itself. Since I had just produced two light shows, I did not have to change anything worth mentioning. I am sure you recognized the parallels. The equipment list looks like this:

For the shooting, the large console was added in the setup, so that I could take an adequate working position. But the available space was also needed. Because I had opened two times DMXControl 3 on my two laptops. The one instance served the recording of the live tutorial itself. On the second laptop DMXControl 3 ran for the control of the background from the 12 Color Mega Wave.i and the white light. Then on the remaining screens was my digital notepad as well as OBS for recording the screen for the tutorial (at least for me). 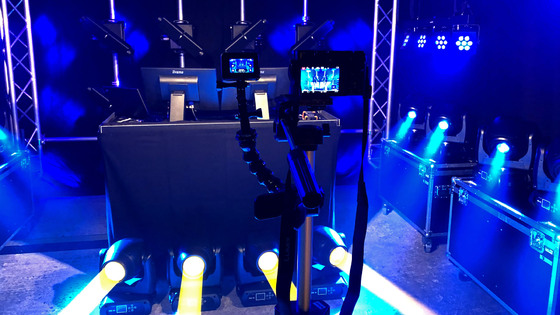 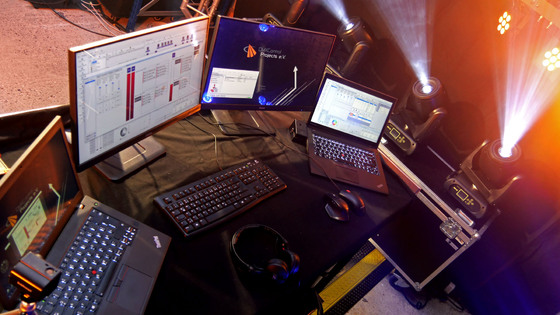 The digital notepad contained various important information about the project we were building together. While the explanations in the videos were correspondingly spontaneous and did not follow a detailed script, the points presented were all the more pre-planned for it. On the one hand, I had noted down the configuration of the Art-Net output and the patch as well as the layout of the Stage View. The most important notes, however, concerned the Cuelists with their timings and triggers as well as the Softdesk including input assignment. Here I had already done an extensive test run in advance and could thus effectively show you everything without having to think much about it myself. Because: it was clear to me from the beginning that the entire tutorial would be longer and would therefore extend over several parts.

During the recording of a video, a total of five cameras were used: two GoPro Hero 4 for the detail shots, a GoPro Hero 7 for the side perspective, a GoPro Hero 8 for the wide shot and a Panasonic GX-9 for the close-up. In addition, the screen had to be recorded via OBS. Through this, I received my first audio track of the microphone at the same time. From my digital mixer, a Mackie DL32R, I fed this directly into OSB via USB connection. At the same time, I used my audio recorder to get a backup track.

This way, a total of seven parallel tracks came together and of course a large amount of data. As is often the case, a project like this does not always work right away, especially when it is designed as a live tutorial. In the end, I went through each video three times from A to Z to not only get a sense of time for the length of the video. During the shoot, I stumbled upon points at individual points that were not yet noted in enough detail in my digital notebook. The most prominent example is the settings for the format node, which I did not note down in detail until after the first shoot. In the end, there is a total of 231 GB of raw material on the hard drive for the five videos. However, I produced over 650 GB of data, which I can now gradually sort out again. 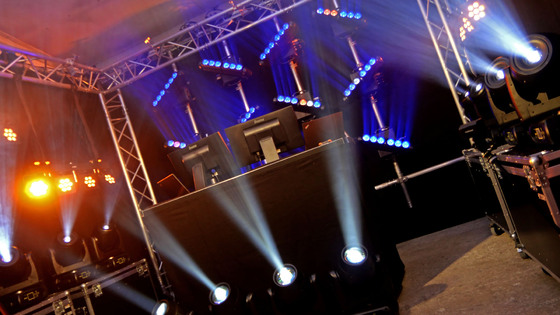 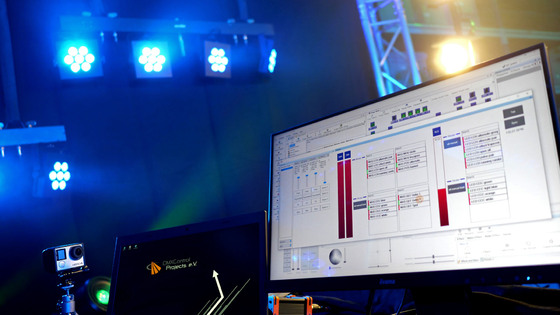 The post-production was then done in Blackmagic Design DaVinci Resolve. The point that all the tracks had audio on them made it pretty straightforward to sync them up. The most time-consuming video was block 2 for the cuelists and cuelist groups, since I wanted to work here particularly often with several video tracks that could be seen in parallel. Shortly after that, however, the last video with the live show follows directly.

If you take a look at the statistics in YouTube, you will quickly see that all this effort was worth it. Within just a few days, the videos had a high number of hits and playback times by our standards. Therefore, we would like to take this opportunity to thank you. It pleases us and especially me that you use the new offers on our YouTube channel so actively.

Yours Stefan and the team of

The last time before the farewell of the cantors in Stuttgart-Vaihingen, Germany they once again brought a musical with one of their children's and youth choirs on stage. Of course also on board: DMXControl 3.

The first edition of the Night Diving Show in 2017 was so enthusiastic that there was a new edition this year. Stefan's report about the show in August 2019.