Today we have a guest article in our Live@Work series. Sebastian tells you today how DMXControl 3.2 was used at a gig of the stand-up comedian Mirja Boes.

I have been working for years as a technician for a small cultural association north of Hanover, Germany, which operates a small theater with 544 seats in the auditorium of a local grammar school. During one season, about 6 to 8 tour theaters are guests in our house and play a piece for one evening. Sometimes the association also hires concerts and stage shows, which then are here on stage. Among them are magic and comedy shows, cabaret and classical music. For the 2nd of November 2019, the cultural association booked the stand-up comedian Mirja Boes and her show "Auf Wiedersehen! Hello!" ("Goodby! Hello!"). Since the ensemble arrives without its own equipment (apart from microphones, instruments and sound mixer), it was up to me as the technical service provider to deliver a professional show to the artists, the audience and of course the organizer. The requirements for the lighting from the technical rider were not very demanding. Three 6-bars with different colors, a mirror ball and a little light from the front with at least two profilers were the basic requirements. However, since I have a lot of fun with lighting and have a little material in stock, I have made it my biggest production, which I have planned and carried out. 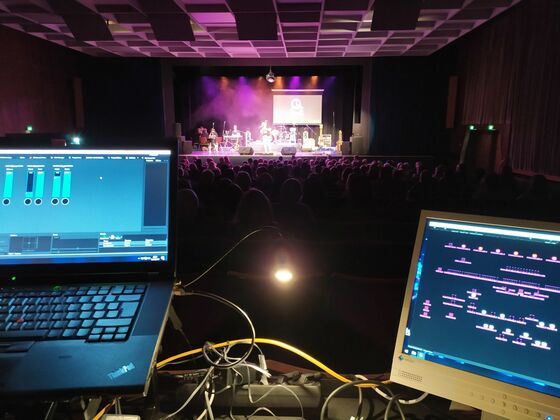 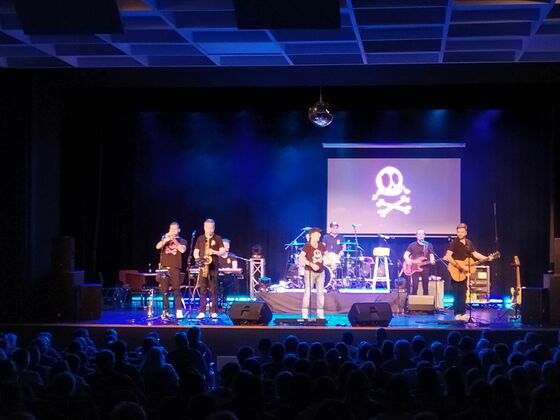 After a bit of planning and looking at what is in my storehouse, the concept for the light was born:

The stage itself has the appropriate white light for the play light and the spot positions. In addition, the audience light is divided into 4 groups and can be controlled via DMX. 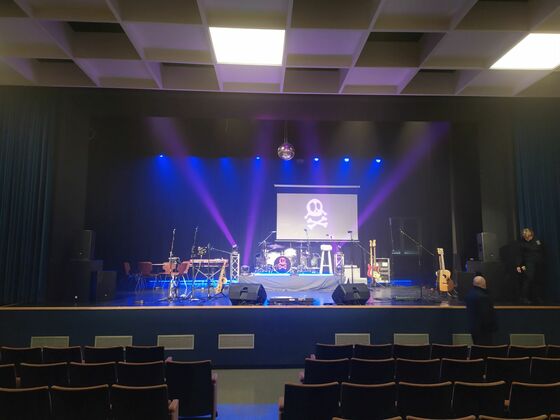 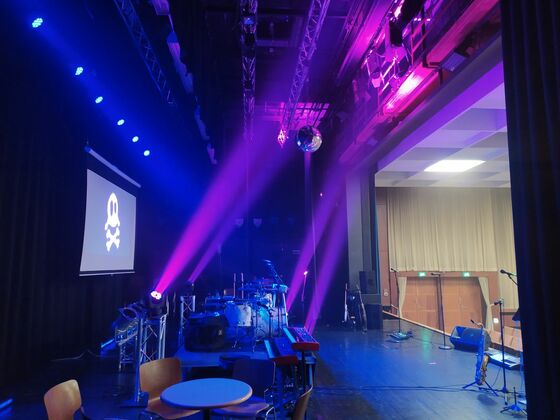 Now, of course, the whole lights also wanted to be controlled. I was only used to DMXControl 2.12.2 until a few weeks ago. But for the amount of LEDs and especially for the moving heads the effect possibilities are rather limited. However, grandMA dot2 onPC didn't want to run on my laptop at the time when I was about to start programming the show. At exactly that time DMXControl 3.2 was released. Wow. The input assignment and the possibilities for fanning effects (which were already possible with the 3.1) convinced me to give the whole thing a chance.

The light should be controlled with the Akai APCmini MIDI controller. Already under DMXControl 2 I have created a kind of building set with which I can call up and assemble various effects and colors. The APCmini also has 9 faders. Perfect for group masters. In accordance with my modular approach, I then created individual cuelists for the various spotlights, subdivided according to color and dimmer effects. Then the respective cuelist groups with "Single List running". I then assigned these cuelists to different buttons of my MIDI controller with the Input Assignment. Button → GO of the cuelist. 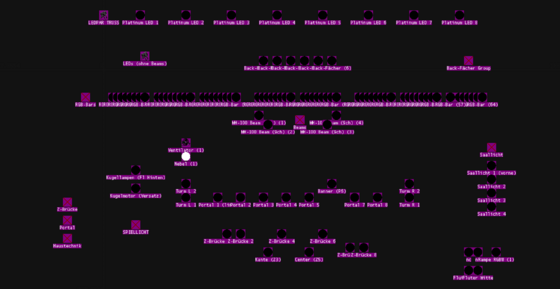 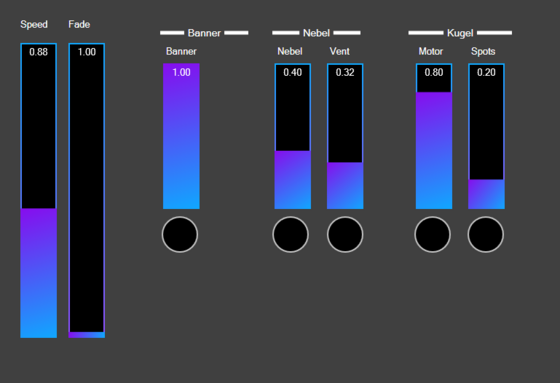 In addition there was a fader for the effect speed of dynamic effects (color gradients, chaser,. . . ) and a switch for the fade speed, with which I can select whether the change between e. g. two colors should be gently faded or hard switched. To support the MIDI controller, I created a softdesk that I could use, for example, to adjust the intensity of the fog machine and the speed of the mirror ball motor. Switching on/off is also done via buttons. Altogether a few evenings passed until all buttons and faders did what I wanted them to do. But the effects for the show stood. 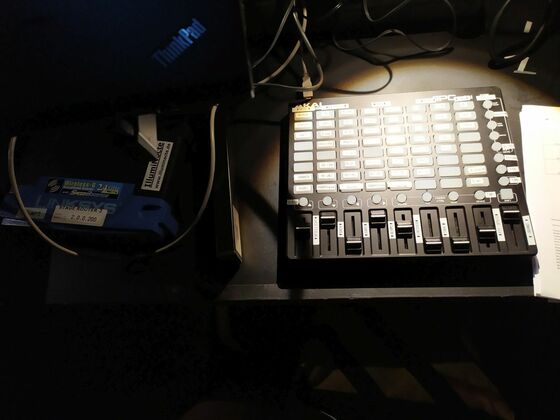 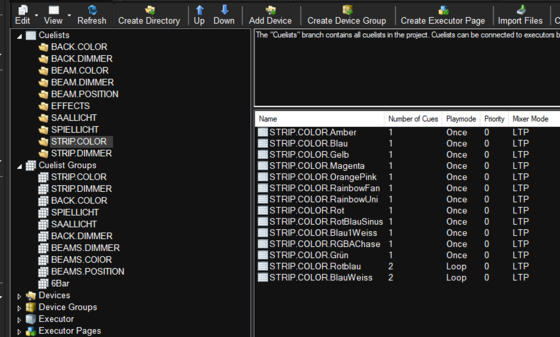 Through a setlist, respectively a flowchart, I knew which color combinations were desired for which pieces (it was a mixture of music and stand up comedy). Depending on the mood, I could then simply use the controller to call up the effects and colors to match the event. In the end, the show looked like one would wish for a professional light show. No dropouts, no hacky effects, but very smooth effects with soft transitions thanks to the fanning. Now dot2 onPC runs on my laptop again. But I will stay with DMXControl 3.2 also for future shows, because I could get used to the operating concept and the input assignment very fast. Even though I may not have solved some problems in the easiest way and in the future there will be many more features in DMXC that will make the whole thing even easier. But in the end exactly the light came out that I imagined. Guests and organizers were happy.

PS: The hall light got its own chaser and brought the light show from the stage to the hall as a small Easteregg at a Rammstein number.

PPS: The WLAN of the stage network with the ArtNet node was called "GuckAufDieBuehne" ("look on the stage"), if one of the guests hoped for an alternative occupation during the show. 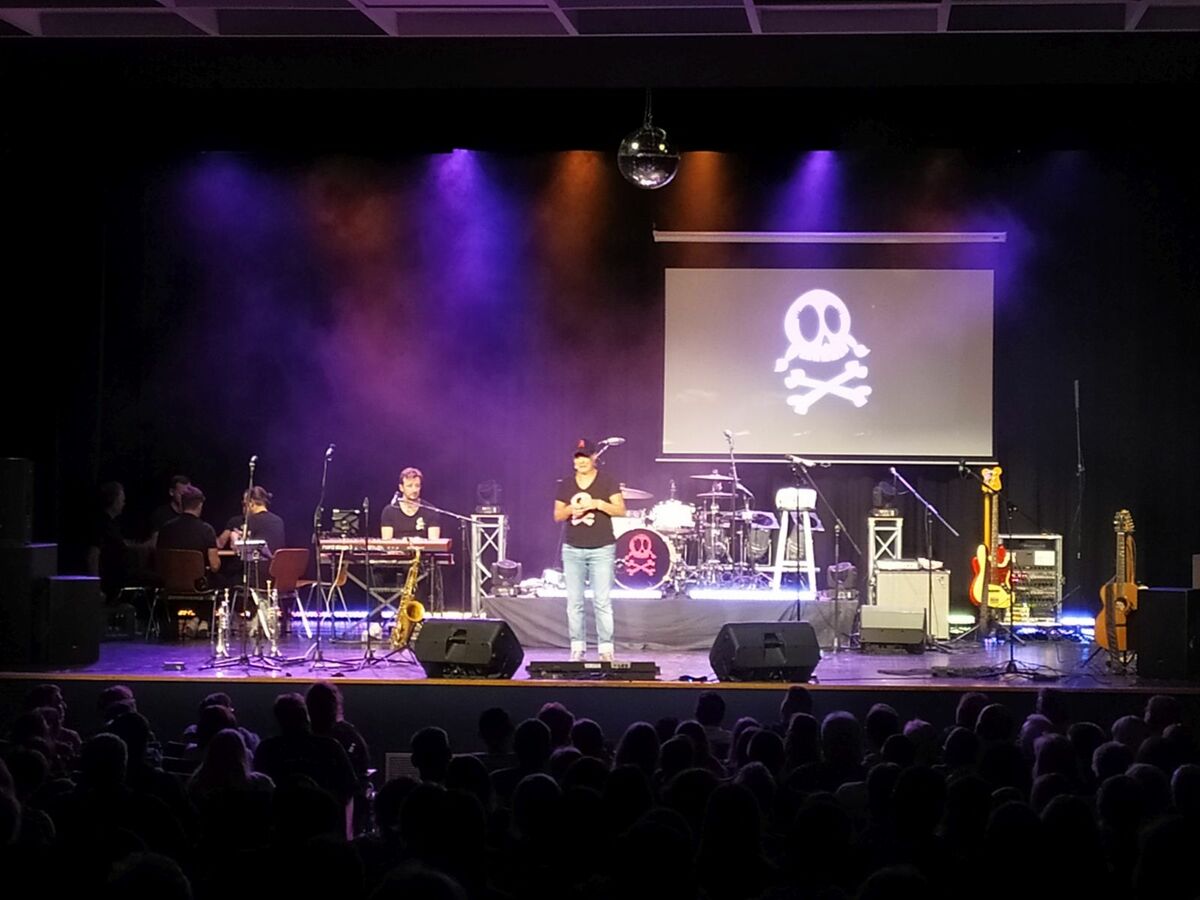