At this point we would like to present a small but very interesting project by Daniel Jaeger: The illumination of a weathercock with DMXControl 2.

A few months ago, our user Daniel Jaeger had to realize a project of a different kind: The illumination of the new weathercock of a parish in Northern Germany. The main challenge was the positioning of the equipment, so that on the one hand it sets the scene for the weathercock and on the other hand it is protected from wind and weather. In addition, the focus should be primarily on the illumination of the weathercock itself and less on the church tower as a whole. 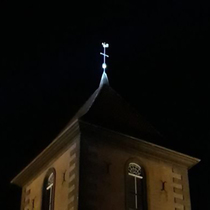 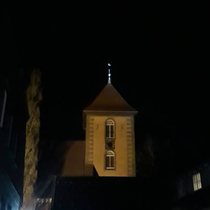 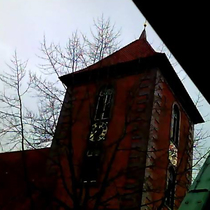 Here the choice fell on two Martin MAC 2000, which were set up on the attic of the opposite town hall. A few roof tiles were then removed from the roof to give the moving heads a good view of the top of the church tower. In combination with zoom and iris the weathercock could be illuminated in the afternoon and evening hours.

It is precisely at this point that the project begins to become interesting: For reasons of economic efficiency, both moving heads should not be in operation for the entire two week period of the project, especially not the lamps. At this point, our user Daniel Jaeger chose DMXControl 2. DMXControl 2 with the "scheduler" brings a feature that is exactly aimed at such applications: The recurring execution of commands over a longer period of time. The time planner not only switched off the light sources via DMX commands, but also the devices as a whole. This was again done via one switch-pack each. In this way, the moving heads ended up operating just over six hours a day.

As an additional technical gimmick, Daniel Jaeger set up a webcam in the attic to be able to monitor the correct process from a distance. 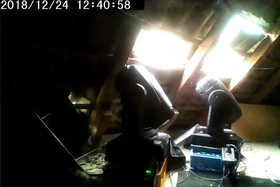 We would like to take this opportunity to thank Daniel Jaeger for submitting this project. If any of you read this Live@Work issue and say "Oh, I have an exciting project here that I'd like to introduce to the community"; please don't forget to bring it here! We would be glad to see it.