At first Sunday of the Advent season, there is noted a very important event in the calendar - meanwhile already at the begin of the year: the visit of the Lichtergesindel crew at Pöcking near Starnberg.

For 18 years the team of the Lichtersindels from Pöcking near Starnberg has been working on their Christmas show. And since then, to the delight of the numerous guests, who meanwhile travel from all over Germany to the small tranquil village on the edge of Lake Starnberg south of Munich, there is something new to discover every year. After last year's highlight with the TwinkleTree 4.0, a ten-meter-high Christmas tree with 2,000 individually controllable LEDs, the latest achievement bears the simple title "Christmas Tree Balls". These are 20 large Christmas tree balls which are illuminated from the inside with RGB LEDs. As with the Twinkle Tree 4.0, the free matrix software Jinx! controls the Christmas Tree Balls. Both instances get their signals to start the right effects from the main PC, on which DMXControl 2 has been running the light shows for years with the help of audio player and other tools.

The makers have created a completely new show this year and dedicate their music to the world around Harry Potter. Here, too, it is almost a tradition that the light show is finished "just in time". Until the last show of the new year, more precisely on January 6th, 2019 at 18:00 o'clock, the show will be refined further during the week and new lighting accents will be added. Due to the large pool of effects that has grown over the years, the show can be programmed relatively quickly – but this year several evenings had to be planned for the programming.

All in all, despite the lack of snow and relatively mild temperatures, it was a successful start to the Advent season again. 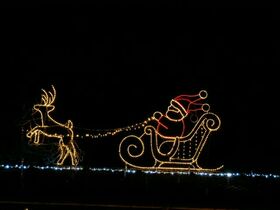 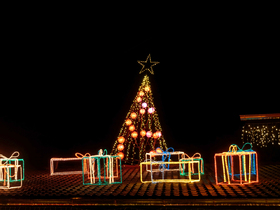 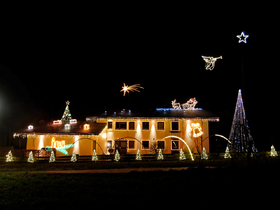