At the end of October the Kaltentaler Burgtheater performed again in the theater hall of the Thomas church in the south of Stuttgart. Here's a report from Jens-Peter.

As in previous years, the "Kaltentaler Burgtheater" performed a theater play at the end of October in the theater hall of the Thomas church in Kaltental, a suburb of Stuttgart, Germany. In the comedy "Neurosige Zeiten" (more or less "neurotic, rosy times" in english), Agnes, a resident of an open-plan lunatic asylum, unexpectedly gets a visit from her mother. To keep the secret of being in a lunatic asylum, all inhabitants of the living group try to appear as normal as possible. Of course, this leads to some confusion and funny circumstances.

From a technical point of view, the setup was almost the same as the one used for the musical of the Vaihinger Children's Choir. Only the stage lights were supplemented by four ADJ Dotz Par. Thanks to the fixed scenery structures, the stage lights could be mounted onto the scenery. As in recent years, they served as backlighting for the color accentuation. In addition to that, the truss was slightly longer than the one at the children's choir due to the wider hall. Here we had also mounted two additional conventional fixtures to illuminate a large banner. However, because there were not enough time, the banner was not hung up, so those fixtures were not needed any more. In order to keep the light project as it is, the fixtures in the truss were simply unplugged. 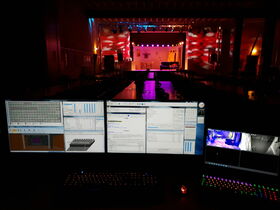 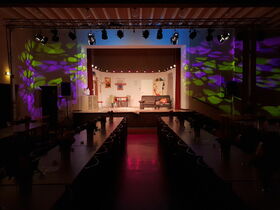 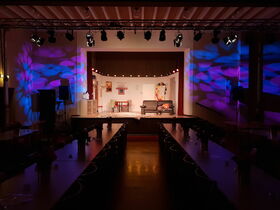 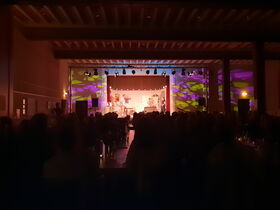 Because of the textbook and the audio support DMXControl 2 and a nodle interface were used again for this show. But the main focus this time was on many sound effects, such as the ringing of various telephones, a toilet flush or a hit of a door. Those sound effects had to be played at exactly the right moment and were triggered with the DMXControl textbook. For the light, the three acts of the play were assigned to different times of day (1st act in the morning, 2nd act at noon, 3rd act in the evening / at night with transition to morning). Different static light scenes were then assigned to these times of day, which were then active throughout the first and second acts. Only in the third act, light scenes were changed more frequently. For example the "room light" was switched on and off several times, which was represented with appropriate lighting scenes. Switching the main fuse off and on was shown with appropriate lighting scenes as well.

The highlight in lighting was the transition from night to morning. For this purpose a moon sharply drawn by one of the two Futurelight EYE-7 began to wander and set, while parallel to this the sun (drawn by the second EYE-7) first rose diffusely reddish, then became a yellow-whitish color while rising. At the same time the morning light scene from the first act faded in. This effect made the audience murmur enthusiastically. Technically the effect was quite complex to realize because of the limited capabilities of DMXControl 2. The positions of the moving heads had to be synchronized between a static simple scene and several motion scenes. Also the course of the movement scene had to be determined by a lot of trial and error. A scene list controlled the whole transition, which was triggered by a command from the textbook. The scene list triggered different effects (motion effects, simple scenes and so on) in the effects sequencer and finally a scene in the textbook. So the whole transition could be started with only one click.

The play was very well received by the audience and everyone is already looking forward to the next performances of the Burgtheater.