Our first Live@Work report this week is about a children's musical which was lighted by our club member Jens-Peter with DMXControl 2.

With "Max und die Käsebande" (engl.: "Max and the cheese gang") the children's choir in Stuttgart-Vaihingen, Germany once again performed a funny and entertaining children's musical. Max has to free Princess Mozzarella from the clutches of Rolly Harzer and Yogi Yogurt, who want to flood the world with insipid cheese. The play was performed in one of the parish halls in the district, which was a certain challenge. The biggest problem was that the existing light and sound equipment in the hall was not sufficient for such a musical. In addition, no spotlights could be hung up due to the lack of existing trusses. So we decided to completely rely on additional equipment. In order to create space for the general stage lighting and various spotlights, an truss with a width of 8 metres was installed in front of the stage. So we could accommodate the following lighting equipment at the truss:

The ARRIs served as a warm-white basic light for the most scenes. With the LED pars and the washers, we also produced a cold-white basic light. This was used, for example, to create a dingy cold-white light scene, in order to intensify the expression of some songs about the insipid and tasteless cheese. The washer and spot moving heads were also used to illuminate the walls to the left and right of the stage with different colours and static gobos. For example, the walls were illuminated with a green gobo on a turquoise-green background in scenes of the cheese factory where the insipid cheese was mixed from green chemicals. Other scenes also received a recognizable gobo pattern. With this we have optically widened the stage and strengthened the impression without distracting too much from the actual scene on stage. To replace the missing backlight for the colours on stage, a total of 12 Eurolite PS-4 HCL were used as floor spots on stage. They were used to suitably illuminate the stage background and to colour the white walls on the stage. Especially with the stage spotlights the atmosphere in the play was supported. 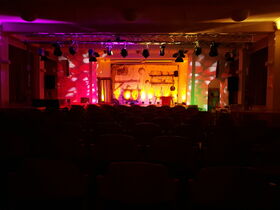 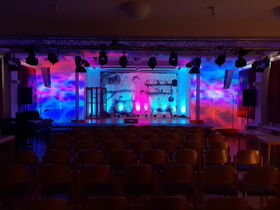 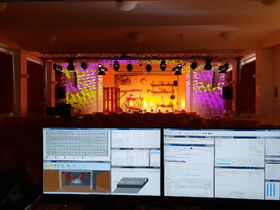 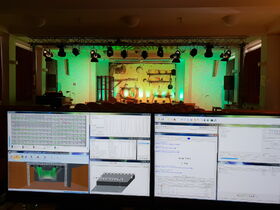 Since the textbook is not yet available in DMXControl 3, the musical was controlled with DMXControl 2. The textbook served as the central control module in which the script and also the complete scene sequence were contained. For a chasing light effect of the LED pars and washers, individual effects for the light and the movement were created in the effect sequencer. They were started or stopped with a start or stop effect controlled from the textbook. The Scene List module was also used for a scene to automate the blackout.

With this equipment, the musical could be staged and thanks to the vigor of the kids the performances were a complete success.